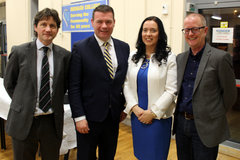 First Data, the world leader in FinTech are setting up their European R&D Headquarters in Nenagh and work on their site in Stereame on the Limerick road is about to commence.  They have already announced that they will be recruiting 300 people for the site and are opening an recruitment office in the town centre in the coming weeks.

I have just spoken to First Data executives over the last week and they have now created the following page https://www.firstdata.com/en_ie/about-first-data/careers.html for prospective candidates to put forward their interest in any of the positions that will become available. People can email the company directly at recruitmentnenagh@firstdata.com and express their interest or get more information.

I am delighted to confirm that First Data will be opening a new recruitment office in the town centre in Nenagh early in the New Year. This is in preparation for the opening of the new R&D facility in the town which is expected to commence construction in the coming weeks. 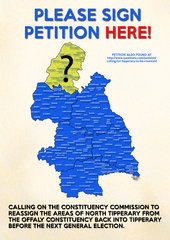 Petition for Newspapers
I am calling on every one in Tipperary to sign this petition before January 6, 2017, the petition will then be sent as a submission to the constituency commission.  The countdown has now commenced to the next boundary review report which should be completed by Summer 2017. We need to make sure that the electoral commission get a very clear understanding that breaking county boundaries is not acceptable, particularly for large counties like Tipperary.
Earlier this year over 10,000 people from North Tipperary were forced to vote in the Offaly constituency in the General Election.  This is a decision that they were not consulted on enough and which flies in the face of common sense considering they're represented locally on Tipperary County Council.

I welcome the announcement by the Minister for Education, Richard Bruton, that 159 primary and special schools in Tipperary are to benefit under the minor works grant scheme

This is extremely valuable money for the school as it allows them to carry out vital minor works such as the replacement of doors or painting works for example, which need to be attended to urgently and on a frequent basis. This will also be of benefit to the students who will learn in an improved environment.”

I welcome the confirmation from Minister Shane Ross in the Seanad that no railway will close but it caused unnecessary fears across rural Ireland.
Minister Ross must secure the necessary investment to make our railway lines the success that they can be.  Our railway network is crucial for attracting investment into our rural towns.
If we want people to use our trains, we need certainty on their future, timetables that are convenient for working people, and investment to improve speeds and reliability. 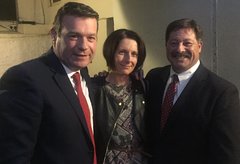 I was delighted to accompany First Data executives to Nenagh last week as they met with the local authority and local businesses to update them on their plans for their new and exciting research and development centre in the town.

The company had a large team in Ireland last week led by their CAO Tom Higgins. Speaking to the local chamber of commerce he confirmed that work is well underway in relation to the move and that the company is aiming to commence the recruitment process for their centre very soon. A separate First Data team spent time in Mid West visiting local colleges last week.

The work on the site will commence early in January once all assessments and tendering are concluded and it's aimed to have the building and full site ready by the summer with some employees on site by the the third quarter of 2016. It is hoped many of their future employees will be local to the area or family members working elsewhere in Ireland or abroad wishing to return home.

I was delighted to spend a number of days meeting with First Data executives last week and I'm thrilled with the progress being made. 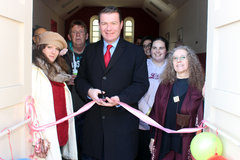 I was delighted to officially open the new indoor market at Nenagh Institute.

I confronted Minister for Health Simon Harris on the review of Mid West ambulance services that is currently being undertaken amid the possibility of the withdrawal of advanced paramedic services int he area.

I commended the performance of towns and villages around Tipperary in this years Tidy Towns competition.
Huge congratulations to Birdhill who won Ireland's Tidiest Village Award, which was an incredible achievement.  Congratulations to Gold Medal winners: Terryglass, Birdhill, Clonmel, Killsheelan and  Emly; Silvermines who won a Silver Medal, Nenagh and Roscrea who won Bronze medals. Congruatlations to Emly who also won the Clean Air Award, and to Tommy Lonergan from Kilsheelan who won the overall Community Heroes Award