I support the HSE’s Protect our Future HPV vaccine campaign and has condemned the comments of his constituency colleague Deputy Mattie McGrath.

This week, more than 30,000 young girls started secondary school and are due to receive the HPV vaccine in the coming weeks. Due to a large misinformation campaign, medical groups are rightly worried that we will see another dramatic fall in the uptake of the vaccination.

I support this life-saving vaccine and the HSE’s information campaign encouraging parents to allow their children to receive the vaccine.

As a father of two young children, the fact that 40 women will die because of non-uptake of the HPV vaccine last year is startling.

Opening of a Class Above Tipperary Town 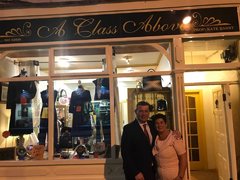 Delighted to be asked to conduct the official opening of Kate Barry's new ladies boutique shop in Tipp Town last night. A fabulous lady who deserves to be supported. Great to see a new retail unit opening on one of the main street's in the town again.

The report that Irish Rail are looking at closing four railway lines, two of them going through Tipperary is nothing new. This has been mooted for many years and something I have fought against.

Tearing up infrastructure that is critical to Tipperary is not acceptable. Across the world Government's are looking at getting goods and the travelling public off roads and on to rail and here we are looking at closing more railway lines.

Have we not learnt any lessons from the closure of so many lines in the last century that would be so valuable now.

Furthermore, how could the Government support such a proposal given it flies in the face of Government policy across a range of areas. This would be contrary to the Regional Action Plans for Jobs, the Government's Action Plan for Rural Ireland and indeed commitments the Government have in relation to climate change.

What needs to happen is proper investment in both the Ballybrophy and Limerick-Waterford lines. The lines are too slow, have too many crossings and do not have attractive services, with very little offering to commute to Dublin. Many of the services aren't even available online.

I am asking the people of Tipperary to fight against these proposals. Having rail lines are very important for inward investment opportunities so how could this Government say they have any interest in Tipperary if they allow this to go ahead.

Minister Ross and this Government needs to get the message that the closure of services at 9 train stations in Tipperary will not be tolerated. I won't accept it and I don't believe the people of Tipperary will either. 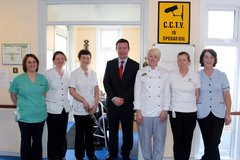 I'm absolutely delighted that this state of the art 50 bed facility which I announced €9 million funding for while a Government Minister in January last year will be built beside Nenagh Hospital. > > The HSE have just secured a 3.5 acre site beside the hospital. I want to thank them for their tireless work and perseverance in delivering this site. > > This new facility will not just double the bed capacity of St. Conlon's but will also provide a range of other services including badly needed respite and rehabilitation beds and facilities. > > It is absolutely necessary that this purpose built facility advances over the coming years in order to meet HIQA requirements.

Expansion of Services at Nenagh Courthouse

I welcome the news that work on the Courthouse in Nenagh will get underway to expand the services.

Deputy Kelly said "I am delighted that work will take place on the Courthouse in Nenagh.  The works will see the provision of a full time office for the Circuit Court. The contract has been awarded to Roscrea building firm, Frank Murray Builders.  The works will start this month and are due to be completed in September.
"This is good news for the area, as prior to this Circuit Court business was carried out through the Courthouse in Clonmel or Limerick

Over 8 million For Improvement of Childcare Services

I welcome allocation of €8.4 million to improve childcare services across the country by the Department for Children and Youth Affairs.
I welcome the allocation of €8.4 million to 683 pre-school providers across the country.  This funding will be used to provide more than 2,200 new childcare places, maintenance and building work as well as outdoor play areas and is available for immediate draw-down by the successful applicants. The good news will benefit children, families and childcare providers under the Early Years programmes

I welcome he news that 25 new Special Needs Assistants will be taken on in Tipperary schools from September.

I am delighted that 25 new Special Needs Assistants will be taken on in schools across Tipperary from September.  This is very welcome news for pupils parents and staff in the relevant schools.

Education Minister Richard Bruton has announced an additional 975 posts across the country for the 2017/18 academic year.

This brings to over 13,800 the number of SNA’s in Primary, Post Primary and Special Schools". 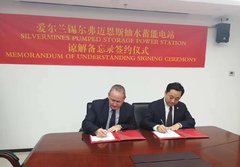 'Early last Weds morning (June 28th) in Beijing, a Memorandum of Understanding between Bord Na Mona and PowerChina was signed to go to the next phase in the development of the Hydro Electric Plant in the Silvermines. This is a very important step and a critical announcement and something I have worked on for a year and half.

As you will be aware in January 2016 working with Darren Quinn CEO of Siga Hydro we announced plans to develop a Hydro electric plant in the old mining area in the Silvermines. It was estimated that the project would cost €650m and would be worth €2.5bn when built. The plant would use 'pump storage' technologies to produce 360 MW of electricity which would power approximately 200,000 houses. The project would create approximately 400 jobs during construction and well over 50 during operation. However, there would be a much greater economic impact on the area from the huge spend that will result and there will be other ancillary benefits.

The project is very similar to the plant in Turlough Hill, Co. Wicklow. Effectively, the plant would have two reservoirs linked together by a huge steel pipe. When there is excess wind energy created across the country, particularly at night, this will be used to pump the water from the lower reservoir to the higher reservoir. Then at times of peak demand (in the morning when we get up and in the evening times) the water is released and flows into the lower reservoir and turns turbines in it thereby creating energy which is used. The plant will be serviced by the 400 and 200 kv lines that are approximately 4km away.

Significantly from a local perspective, the project will not alone be a zero emission hydro electric power station but will also greatly advance the environmental rehabilitation of the area, with water in the existing reservoir set to be decontaminated, ending the seepage of harmful minerals into local water tables. It will also help with an overall plan to finally deal with all the environmental issues that exist from centuries of mining in the area.

When I was a Minister in the last Government, we launched a White Paper on Energy Policy that stressed the need for such a facility in Ireland. This was crucially important to progress this project. Furthermore, Tipperary County Council supported the development of such infrastructure through their plans and policies too.

After that there were a huge volume of meetings and discussions with various companies and organisations on the project. There were many meetings and conversations with the Minister for Energy and his Department.

This all resulted in a visit from representatives of the PowerChina company (http://en.powerchina.cn/about.html) in March of this year. They were here for approximately 10 days and I met them on a number of occasions. They spent some time surveying the Silvermines site and I accompanied them as the local TD. I also had a number of meetings with the Chinese Ambassador to Ireland and he was very supportive.

As a result of this, last Wednesday morning a Memorandum of Understanding was signed between Bord Na Mona (in conjunction with Siga Hydro) and Power China to go to the next stage of the project. It is very important that Bord Na Mona were involved as the have experience with developing and planning large scale projects in Ireland.

This is a critical milestone for this great project and I'm absolutely thrilled with this. It's taken many, many hours, days and even weeks of work to get to this stage and I look forward to working with all the partners into the future as they bring this project further towards a planning application.

I will keep everyone updated as required. I want to thank the community in the Silvermines in particular for their support to date and also, Tipperary County Council, my colleague Cllr Fiona Bonfield and many friends and staff'.

Photo of the signing of the Memorandum of Understanding today by Mike Quinn CEO Bord Na Mona and Mr. Du Chunguo President PowerChina.

I very much welcome the decision by the constituency commission to bring Lower Ormond and its environs back into the Tipperary constituency.

This is something I campaigned for and submitted a petition to the Commission on. I was alone amongst Tipperary TDs in doing so. It was something I researched for some time and put forward both legal and moral arguments as to why the area should be put back into Tipperary.

I asked the people of Lower Ormond to support me on this and almost 1500 did so by way of a petition I organised. I want to thank them all for their support and in particular the many local businesses who organised the petition for me.

It was always totally wrong that over 10,000 people were moved into Offaly. They were furious at such a move and it didn't make sense particularly as the county council and VEC mergers created an alignment of services in Tipperary and this went totally against this.

On the other hand I am deeply upset and annoyed that the Commission has decided to move Newport, Birdhill and some related areas into Offaly. This is a disgraceful move.

The very correct reasons given for moving Lower Ormond back into Tipperary are contradicted by their decision to move the Newport and Birdhill  areas into Limerick.

These areas part of Tipperary. They are not part of Limerick. I've represented the people of this area for a decade and they've been good to me. I've been fielding calls all week at how furious they are with this move. It doesn't make sense to them and it doesn't make sense to me. Myself and my colleague Cllr Fiona Bonfield will be fighting to get this area back into Tipperary at the earliest opportunity.

I welcome the appointment of the Thurles Civil Registration Service Officer.

The position of Registrar in Thurles has been vacant since early last year following a retirement forcing locals to travel to other offices in the county to avail of the services.

The new Civil Registration Service Officer started in the role yesterday, and will work on Mondays, Tuesdays and Thursday.  This is good news for Thurles.   I had been in contact with the HSE in relation to this issue  following representations from a number of constituents in the Thurles area.