Where are the IDA jobs for Tipp?

While I very much welcome the announcement of another 400 jobs in Northern Trust for Limerick and the Mid West, I have to ask what is happening now for County Tipperary.

I hope some jobseekers from Tipperary will indeed get jobs as part of this announcement but the simple fact is that there has been little or no job announcements from the IDA for Tipperary during the term of this Government. So I have to ask is County Tipperary really a priority for this Fine Gael led Government supported by Fianna Fáil and Michael Lowry and when it suits him Mattie McGrath?

Tipperary is suffering because of the policies or lack of them of this Government and their supporters in Fianna Fáil and Michael Lowry. We haven't a focus on Tipperary anymore under this charade of a Government. It's as simple as that. His is despite the best efforts of various organisations like Tipperary County Council, Invest Tipp, Jobs For Tipp, Tipperary Chamber and others.

When I was a member of Cabinet, I was able to ensure Tipperary was represented at the highest level. I also made sure the IDA delivered for County Tipperary with Amneal and First Data being prime examples of this. Even in opposition, as Jobs Spokesperson, I've delivered a platform for the IDA in the coming years to finally deliver much needed jobs in the new Sky Innovation Park site in Tipperary Town.

However, it seems definitive now that County Tipperary is no longer a priority for this current Government or their supporters in Tipperary.

I am delighted that the new Emergency Department in University Hospital Limerick has opened ahead of schedule.  I fully supported CEO Collette Cowan when she made the decision to open the department today, despite there been problems with funding the department for part of 2017.  It is hugely important that the new emergency department opened as soon as possible as the previous situation was unsustainable for both patients, their families and staff.

The new Emergency Department is three-and-a-half times the size of the current one, and is state-of-the-art when it comes to design and use of technology and meets patient safety and privacy requirements, including a designated waiting are for pediatric patients.  The total cost of the project is €24 million.

Pictured following the installation of new Visitor Signs in Rearcross following the completion of work there are Alan Kelly TD & Cllr Fiona Bonfield and with members of Rearcross Tidy Towns. Deputy Kelly when Minister announced large scale funding for Rearcross.

Funding of €4 million for Tipperary Projects

I welcome an allocation of funding from the Minister for Communications, Climate Action and Environment, Mr Denis Naughten, of €4 million for community energy projects in Tipperary.
This year's funding will provide for energy efficiency upgrades to more than 2,013 homes across the country, of which 1,510 are energy poor, and a further 479 community, public and commercial facilities.
The Better Energy Communities Schemes is intended to assist private and public buildings achieve energy efficiency upgrading. The projects in Tipperary will see the installation and/or upgrading of energy efficient heating systems; energy efficient lighting, and solar heating.

Launch of Darkness into Light 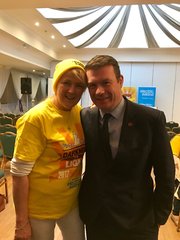 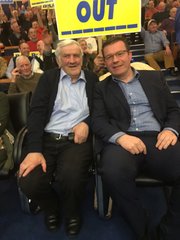 I am delighted to confirm that the Department of Education & Skills has approved funding for five mainstream classrooms, toilet facilities and funding for the demolition of prefabs for St. Joseph's CBS in Nenagh.  This is very welcome news for the school, I am delighted for the staff, management and pupils there.  St. Joseph's CBS in Nenagh is a very progressive school.  In 2013 I was delighted to be in a position to officially open the €470,734.00 extension at the school. It is great to see further development taking place.

I would like to wish principal Karen O'Donnell, the staff, pupils and Board of Management of the school continued success and congratulate them on their hard work and commitment to the school.

State Must Intervene in Slivermines Land

I beleive that the State has to intervene and invest on behalf of the people of the Silvermines in the old mining lands.

We've had some very positive developments in the Silvermines in recent times with the announcement of the Hydro Electric Project which is progressing along nicely. I've had several meetings in relation to the project in recent months and I expect there will be a further update on the progression of the project before the Summer. This is an incredible project that will supply up to 10% of the country's electricity when completed. It will provide employment and also clean up an environmental legacy.

However, we also have the rather concerning developments regarding some of the other old mining lands in the area and they need to be addressed.

Need for more ASD classes in schools in the Nenagh area

I have a number of parents who are struggling to get their children into an ASD class despite it being clear that this is the best choice for their children. They are willing to go to the ends of the earth in order to help their children and travel long distances to get to a designated school but even with such sacrifices there are some who cannot get a place.

There are approximately 14,000 students with ASD in the school system and of these approximately 23% are educated in special classes in mainstream primary and post-primary schools. These special classes operate across Tipperary in over 40 schools but we simly do not have enough of them to meet the obvious needs of the children that require them.