I welcome the news that 88 childcare facilities in Tipperary have been awarded grants today as part of a €7m scheme for early years services.

Facilities in the local area which benefit from the fund include: Ladybird's Playschool & Childminding Service in Nenagh, Laethanta Sona Montessori Pre-School in Roscrea, The Old School House, Pouldine and Tumbletots Playschool in Clerihan, Clonmel.

The scheme covers large scale capital funding, essential medium-scale maintenance, and the upgrading of ICT equipment. These grants will help facilities keep up with the demands of a busy modern childcare service. The news comes as Labour launched their new ‘Let’s Talk About Childcare’ campaign this week.

I have announced major reforms to the Building Regulations that will slash costs and reduce red tape for people who want to self-build their homes.

Under the reforms, people building single dwellings or extensions will be given the choice of opting out of statutory certification and may instead show by alternative means that they have met their general obligation to build in accordance with the minimum requirements of the building regulations. Additional guidance, including a... Sample Preliminary Inspection Plan, will be published to assist with this process.

Tipperary County Council is set for another housing boost following a further allocation  from my Department.

I have allocated €3.6million to Tipperary for the acquisition and purchase of homes for people with specific housing needs – the elderly, disabled persons and homeless persons.

The news is on top of the €57 million already announced by Minister Kelly last April for Tipperary County Council. This new funding now brings the total housing spend in Tipperary to 2017 to over €60 million.

The new funding will see 27 new housing units put in place in Tipperary. Seven of these will be acquired this year by voluntary housing bodies, Focus, Simon and Camphill Communities.

I am delighted to confirm that a total of €2,939,731 had been allocated to Tipperary.

Have Your Say on the Future of Rural Ireland

The Labour Party Tipperary are holding a Rural Affairs Evening in the Clonmel Park Hotel, tomorrow Thursday June 11th at 7.30pm. The night will focus on the developments that have been made in Rural Ireland over the past few years and also the aims for the future.

Marie Sherlock, who drawing up the Labour Party Manifesto for the next general election will be present on the night. All in attendance will be given the opportunity to s...hare their ideas and Marie will be collating the ideas, which will all be considered in the writing up of the manifesto.

Speaking on the night will be Minister for Rural Affairs Ann Phelan TD, Senator Denis Landy and myself.

I urge eligible groups in Tipperary to apply for a new €1 million funding scheme that has been announced for Home Carers.

The Tánaiste and Social Protection Minister Joan Burton announced her Department was providing the €1m support and training fund. The money, which will come from the Dormant Accounts Fund, was confirmed in conjunction with National Carers’ Week.

I welcome this new scheme which will help fund schemes which provide training, information and related support... services for Home Carers.

Funding for a Long Awaited New Fire Station in Templemore 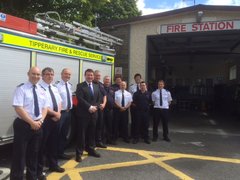 This morning I announced funding for a long awaited new fire station in Templemore.

I have a huge affinity with the fire service so I was delighted to visit the fire service team in Templemore today to announce funding for a new fire station. They have waited way too long for this announcement. The current fire station was built in the 1960s and they desperately needed a new one which I'm delighted will go to tender now.

I welcome the announcement that eircom plans to deliver high-speed broadband access to an additional 300,000 addresses. Tipperary is to have access to speeds of up to 1Gb/s ‘end to end’ fibre to the home (FTTH) technology in 21 new locations as a result of this major regional investment by eircom.

I can confirm that major works on Nenagh's water supply and wastewater system will begin next month.

I announced in July last year that the contract for the new gas line into Nenagh had been signed at an investment of approximately €8.5 million. This new energy source will make Nenagh much more competitive for investment thereby creating and maintaining jobs. I expect the gas line to be turned on for Arrabawn Co-op in the coming weeks and then rolled out over 14 kilometres across the town. 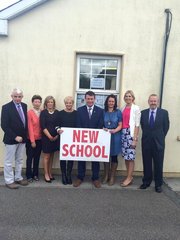 Today I announced  that Clonmore National School  has been allocated funding for major renovations/extension at the school.

The school has been approved for two mainstream classrooms, refurbishment costs to include new partitions, electrical and mechanical upgrade, dry lining where necessary and wheelchair access and prefab removal
I am absolutely thrilled to announce this news for the school, I have no doubt whatsoever that it will be welcomed by pupils, staff, parents, Chairperson of the Board of Management Pat Murray and Board of Management at the school.   I have had many meetings with Minister Jan O'Sullivan and sent many letters  to the Department of Education in relation to the school.