An additional 14,000 Carers are eligible for free GP Services.

I would encourage all carers in receipt of full or half rate Carer’s Allowance or Carer’s Benefit, who do not currently hold a medical or GP visit card to apply online, following the extension of the GP Visit Scheme. The HSE has set up an online system for carers to register for their free GP Visit Card on www.mymedicalcard.ie, and paper registration is also available ile by downloading a form from the website. Carers play such a crucial role in our society today. This is a very welcome initiative and goes some way to recognise the important role played by carers.

€40 million is being made available under a new round of the Sports Capital Programme (SCP). The SCP is the State’s primary vehicle for providing support to sports clubs and communities to develop sports infrastructure around the country. Applications can only be made online from 9am on Friday 7th September until 5pm on Friday 19th October, 2018. 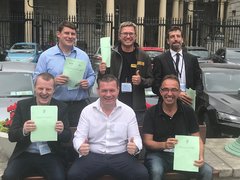 I am pictured following the passing of the Craft Brewers Bill in Leinster House with Cuilian Loughnane from White Gypsy Brewery along with other craft brewers from around the country. The bill will allow craft brewers, distillers and cider makers to sell their own produce on site from their own premises.

I’m delighted to confirm following discussions with Minister for the OPW, Kevin ‘Boxer’ Moran that significant funding is being provided to Nenagh Garda Station to upgrade a number of areas in the station and to provide a Single Storey Motorcycle Enclosure for the garda fleet. This is a badly needed upgrade for the station.

Furthermore, Minister Moran has confirmed to me that the study he commissioned regarding Nenagh Castle is nearly completed and he hopes to be in a position to review the plan in the coming weeks. One area he has committed to me as a priority is to fund the provision of lights for the castle. This will be a fantastic addition to the town and will highlight the fantastic heritage of the town of which the castle is the centrepiece’

Following discussions with Minister Simon Harris I’m delighted to announce that Nenagh Hospital is to become a major hub for Cataract surgery in Ireland.

I have been pursuing the issue of ophthalmology surgery for some time as there are so many people who are waiting for operations, particularly cataract operations.

Nenagh Hospital has been chosen after the Network of Limerick Hospitals put forward the case internally in the HSE of need for such a Centre for ophthalmology surgery. One of the key reasons Nenagh was chosen is because of its central location in the country.

It is expected cataract surgery will commence in Nenagh in July initially one day a week but moving relatively quickly to 5 days a week. It is expected that Nenagh will clear over 50 patients a week. The Centre will deal with the full patient journey from referral to surgery to follow up. 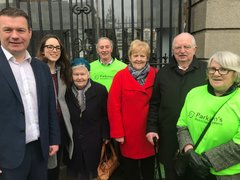 I very much welcome that the Department of Transport has increased the funding for Regional and Local roads in Tipperary by €2.5m to €21m. While this is a welcome development more needs to be done. The condition of our regional and local roads are in such a state that a massive increase in funding is required. Every year this lack of investment continues the bigger the problem is going to get.

The allocation of €6.5m to the Ballina/Killaloe bridge is particularly important as it progresses to construction phase after I ensured it was put into the capital spending plans.

However there are huge requirements across our  roads in Tipperary and the investment in our roads needs to improve dramatically. The fact is that Tipperary is probably one of the most traversed counties in Ireland given our geographical location. We need greater proportional funding as a result and we need to deal with a number of safety issues as well.

Furthermore there needs to be an assessment of the on/off ramps at Roscrea/Moneygal which are unique on the M7. All other junctions have a longer lead in and is believe there are safety issues with these junctions. I’ve spoken to TII and they are going to look at these and see if improvements can be made to them.

Furthermore they are going to look at the whole route from Roscrea to Birdhill on the M7. There have been a number of accidents on the M7 and this really does need to be looked at. The Birdhill area in in particular needs to be looked at’. 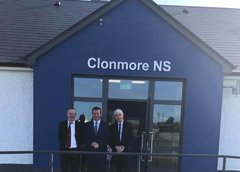 I was delighted to take part in the official opening of Clonmore National School last week.  In 2015 I announced  that Clonmore National School  had been allocated funding for major renovations/extension at the school.  The school was approved for funding for two mainstream classrooms, refurbishment costs to including new partitions, electrical and mechanical upgrade, dry lining where necessary, wheelchair access and prefab removal.  The announcement followed many meetings with the then Minister for Education & Skills Jan O'Sullivan TD. 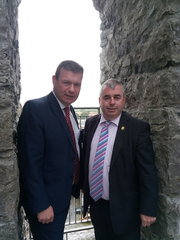 I have been raising the issue of the funding required to carry out phase two works on Nenagh Castle with the Minister for Public Works for months now.

After his visit last week, I have subsequently been in touch with him and I am confident that the Minister will provide funding to commence the works that have been planned for many years now.

Nenagh Castle looks fantastic and has had record numbers of visitors over the last year. We need to continue this and developing the original entrance to the castle, completing more renovation works and looking at an interpretive centre would really enhance the visitor experience of this fabulous attraction. I'm confident that Minister Moran will help us with this and that funding will be provided in the coming months.

Deputy Mattie McGrath's Partitionist position on Tipperary's railway lines is completely unacceptable. Last week he stated that he couldn't justify supporting the continuance of the Ballybrophy line but he could support the Limerick Junction to Waterford line. So in effect Deputy McGrath wants to keep the line that is running in the Southern end of the county but wants to close the one in the Northern end. How can he adopt such a stance and still say he wants to represent all the people of Tipperary equally.