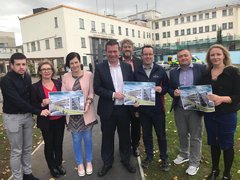 I am delighted it has been confirmed this morning that a new 60 bed modular unit will be built at University Hospital Limerick. This is something I have been campaigning for with my Labour colleagues to ease the overcrowding issue in there for some time. It is not going to solve the unacceptable delays and overcrowding but it is a step in the right direction. Important that Nenagh, St Johns and Ennis Hospitals are used more and that transport between hospitals is improved. The staff working in the hospitals do a great job. 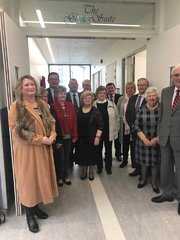 Great day at the opening of the new ward and Cataract Centre in Nenagh hospital. Even more special was the opening of the Gloster Suite for end of life care which was funded from a donation from the Gloster family to the Friends of Nenagh Hospital. This was very special and marked the exceptional work that the Friends have done for many years. I would like to thank them sincerely for their work for generations for the hospital.

Anam Cara Tipperary, the organisation that supports bereaved parents, will hold its next monthly Parent Evening on Monday 15th October at 7:20pm in the Horse & Jockey Hotel, Thurles Co. Tipperary. Anam Cara Tipperary offers a safe and comfortable setting where you can ‘drop the mask’ and be yourself among people who understand. This event is free and open to all bereaved parents regardless of the age your child died, the circumstances of their death, or whether their death was recent or not.

I am delighted to confirm that allocation of €913,266 in funding in Tipperary from the Department of Rural and Community Development for the 2018 Town & Village Renewal Scheme.

The Scally Report into the Cervical Check Scandal 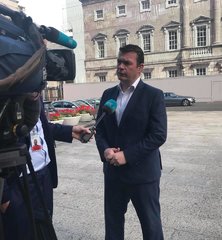 Today was busy day as the Scally Report into the Cervical Check Scandal was published. It was an emotional day too for the women and families affected. It is a comprehensive and very good report. I met and spoke with Dr Scally for over two hours. It is now critical that his recommendations are implemented immediately. There is also more work to be done to investigate why, how and when some of this happened. However, today is an important milestone. It creates a pathwa...y to help us eradicate cervical cancer as a main cancer in Ireland and to help protect future generations of both girls and boys. Tonight I’m thinking of Vicky Phelan as without her determination and courage we wouldn’t have reached this milestone. I’m also thinking of Stephen Teap and Lorraine Walsh who have tirelessly worked with Vicky and Dr Scally over the last few months. These are incredible people. Some of the best people I have ever met. The country owes them a debt of gratitude. 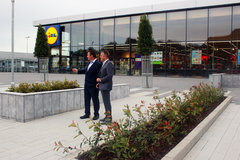 I want to thank developer Martin Healy for the interest he has shown in Nenagh by redeveloping the former O’Connor’s shopping site.

The site was left derelict for many years until Martin purchased it and only for him it may have remained so. I was delighted to be able to work with him to develop the site and ensure vibrancy was brought back to that very special site in Nenagh.

This district has a great future with future shopping potential in the area along with the redevelopment of Sheehan’s Hardware and the proposed redevelopment of the Mr Price building as well.

I look forward to all this work going ahead and I know there are other future development plans in the town as well that will compliment these developments.

It shows how Nenagh as a town is growing and that was reinforced recently when it was announced that Nenagh is he fastest growing town in Tipperary.

With new industries such as First Data and new has, water and sewage infrastructure aided to a fantastic location Nenagh will go from strength to strength in the coming years

Due to the publication on Wednesday/Thursday of the Scally Report into the CervicalCheck Scandal which was exposed by Vicky Phelan, the public meeting that Vicky was due to speak at on Thursday next in the Abbey Court Hotel, Nenagh has changed date.

The meeting will now take place on Monday 24th September at 7:30pm in the Abbey Court Hotel. Admission is free. Please come along. 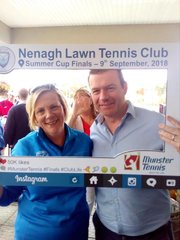 Today I visited Nenagh Lawn Tennis Club for the Summer Cup Finals. There’s lots going on in the club on Limerick Road, well done to all involved. I am pictured with Margaret Folan President of the Club. 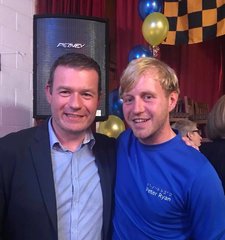 Great night last night in Drombane with local hero Peter Ryan and his cycling partner and friend Sean Hahessy who celebrated being the first tandem cyclists to ever complete the 2150 KM non-stop cycle race around the whole of Ireland.

Peter who began losing his sight when he was 20 and Sean did this massive endurance cycle in 5 days to raise funds for two local Tipperary families who are very much in need of support; the Doran and Gleeson Families.

I know Peter. He is a grea...t guy who in his spare time gives talks to schools and groups about disabilities and his own unique story. After he recovers from this test he will return to training intensely and preparing for the 2020 Paralympics in Tokyo, Japan. 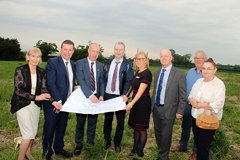 The new St. Conlon’s Home which I secured €9 million funding for will go for planning this year. This is a state of the art new nursing home that will have a full range of facilities built on a 3.5 acre site.

The design team has been appointed and a planning application will then be submitted to Tipperary County Council.

Subject to planning the project should then proceed to tender for construction which would be built over the following year and a half.

This is great news and something I’m particularly happy about given the affection with which St. Conlon’s is held by all local people.