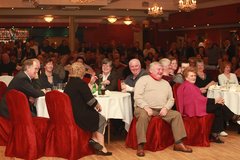 We had a great night in the Abbey Court Hotel. I could not get over the crowd that turned up. It was simply fantastic. It was a night to thank all my family, friends and supporters for all the work they did for me. At the end of the day they are the reason I was elected TD.

It was a specail night also for all the lads who had worked with me for so long, Tracey, Deirdre and Michelle in particular along with John, Colm and DEan as well as many others. They delivered for me when it mattered most. I had a specail word for my DOE Liam Gleeson, a mountain of drive, common sense and loyalty. I'll never forget all the work he got through. 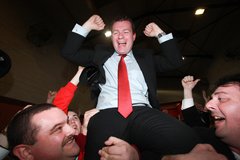 I am absolutely thrilled to have been elected as a TD for my constituency. It is a great honour to follow in the foot steps of John Ryan and Paddy Tierney. I want to thank all those that voted firstly and in particular to those 9,559 who gave me their first preference. It was a dream fulfilled for me to be elected a TD for this constituency, a dream I had since I was very young. I will do my very best to represent you and work hard for you over the coming years.

HAVE YOUR SAY TODAY

With a week to go and the reception is still terrific. There is a long way to go but I remain optimistic and hopeful.

While everyone has issues that are personal to them, jobs and the economy still remain the big issues.

When you hear the despair in the voice of parents because their kids have emigrated, you would have to be made of stone not to be moved.

You have to use that to motivate you. You want to do better for people and you want to make sure that we are never let down as a country again.

INVEST NORTH TIPP UP AND RUNNING

A simple way of describing it is that it is almost like a Dragons Den for North Tipperary – although it is confined to the areas that are likely to yield employment in the future, ICT, pharma, medical devices and clean tech. The pool of finance available is €1million and two investment companies have come on board, Ronoc & Tolisons.

Both of these are leading Irish Investment companies with a track record and reputation for delivering results. The programme would work by companies going through a strict investment application and if successful the investors would take an equity share in the company. 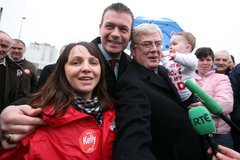 Eamon’s visit gave everyone a fillip. It was a little chaotic as the crowd gathered round him in Arrabawn car park but what effectively evolved into a campaign rally came about.

Gilmore was at his best, condemning the disgraceful cuts forced on ordinary people because of bankers and poor politicians.

Canvassing is well underway. Leaflets done, new shoes are bought and hands are being shaken. The reception has been overwhelming. People are angry, willing to engage and are looking for something to be optimistic about. That is the message I have been trying to get across on the doorsteps.

Of course this canvassing is very different to the EU elections where we mostly concentrated on events, standing outside shopping centres rather then knocking on doors. 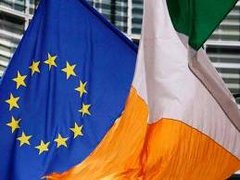 I have just published the letter from EU Commission Vice President, Joaquin Almunia, explaining how AIB passed banking stress tests last July but was eventually nationalised by year-end. (See text of letter below this blog.)

It is clear that the latest AIB bailout was effectively caused by NAMA and the failure of the government to predict these losses while also taking the bank’s position at face value.

Commissioner Almunia makes it clear in his letter that NAMA’s second discount on AIB loans immediately required an additional €3b cash. This could only come from the Irish taxpayer.

When the government first stress tested the bank, it underestimated the NAMA discount – even though NAMA is a state-body. Was there no co-ordination on this by the Finance Minister? 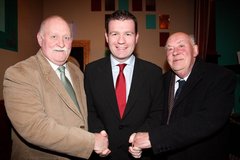 With my Proposer and Seconder

Friday, December 17th will always be a proud datte for me as I fulfilled a dream of becoming the Labour party's Dail General Election candidate. A large crowd attended the Convention in The Rag, Thurles despite the terrible weather conditions. It was a very special night for myself and my family who have been involved in the Labour party for many years. I was especially pleased to see so many new faces at the event who want a change and I'm delighted that they see me as the avenue to that change in North Tipperary. I was nominated to run by Ger Lewis from Nenagh. Ger is one of the most popular Labour members I have ever met. Last year he along with his brother Frank were gold medal winners for their contribution to the Labour party. My Party Leader Eamon Gilmore is a good friend of his. His electoral knowledge is fantastic and he has been a great friend of mine for many years. Michael Shanhan is a good old friend of mine from Roscrea, whose father Tommy Shanahan was a long time Councillor for the party in that area. I was delighted to have the calibe of these two great individuals to propose and second me. 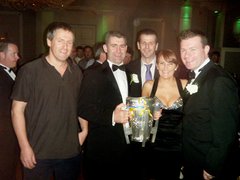 I was in New York last week doing some work that I had planned for some time. While there I was delighted to take up an invitation to attend the Tipperary GAA Dinner Dance. It was a fantastic occasion especially as the Liam McCarthy was present under the stewardship of Tipp Manager Liam Sheedy and Captain Eoin Kelly. Also present were selector Mick Ryan and Tipp U 21 Captain Padraic Maher. We also had a Kerry man in our midst in the statur of John Evans, Tipp Football Manager and a real character.