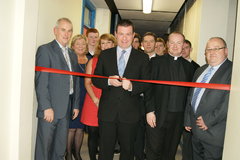 I was delighted to open the €470,734.00 extension to St. Joseph's CBS Secondary School on Friday night last. It was a special night for me as a former pupil of the school. I would like to wish principal Tony Slattery, the staff, pupils and Board of Management of the school the very best of luck and congratulate them on their hard work and commitment to the school.

I welcome the news that  Minister for the Environment, Community and Local Government, Phil Hogan TD has approved the necessary funding to allow South Tipperary Council award the €12.4m contract to provide Water Treatment Plants and ancillary works at Cloran, Fethard and Glengarra, Burncourt, all of which are crucial elements of Burncourt & Fethard Regional Water Supply Scheme.

When the works are completed Burncourt, Fethard and their Environs will have quality drinking supply which will provide for both residential and commercial needs which will comply with European and National standards for drinking water.  Once the tendering process is completed, work should start at the earliest possible date. 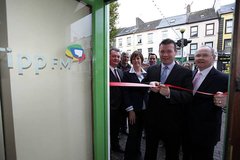 I was delighted to cut the ribbon on Tipp FM's New Broadcast Centre in Nenagh this morning. It is a state of the art facility which will provide direct contact between the station and Tipp FM's audience in the North of the county. Well done to Tipp FM, it is very positive news, it's great to have two studios in operation in Tipperary. Tipp FM is is one of the most success regional radio stations in the country, which of course doesn't happen without a lot of hard work, well done to Liam O'Shea, Fran, Seamus, Antoinette and all the team on the schedule they put together and the service they offer to all of us in Tipperary. 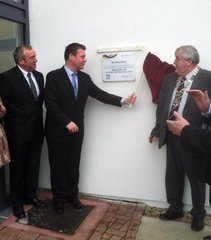 I officially opened RehabCares's New Resource Centre in Stradavoher Thurles today. I was delighted to be asked to open the centre, it is a first class facility and the value to both the service user and their families is immeasurable. The facility is here because of the foresight and enthusiasm of Newgrove Housing Association and Rehabcare. I would like to compliment the staff of this facility who at all times exude commitment and professionalism.

New School for Carrick on Suir

I'm delighted that the new school for Carrick on Suir to replace Comeragh Community College is going to commence in 2014 as announced by Minister Quinn today. It means that the school will be in place to benefit the students of the town as promised by this government and it also will result in many jobs during the construction phase of this large project. 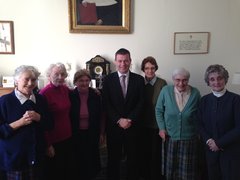 On a recent visit to Our Lady's Secondary School Templemore, I visited the convent where I met Sr. Rosario, Sr. Emmanuelle, Sr. Rita, Sr. Joan, Sr. Bridget and Sr. Helen on the occasion of the 150th anniversary of the arrival of the first nuns in Templemore

I welcome the announcement today that the HSE Mid West has received
five new intermediate care ambulances for the region which will carry
out routine transfers and free up front line ambulances to attend
emergency calls. One of the vehicles will be based in Nenagh, one in
Ennis and three at University Hospital Limerick.

This announcement follows on from a meeting I had
with Minister for Health James Reilly in October last year, during the
meeting I made a request for intermediate patient transfer vehicles
throughout the Mid-West and in particular between Nenagh and Limerick.

I am delighted with this announcement this will allow greater and
more timely movement of non-emergency patients between the hospitals
thereby helping to alleviate pressure in particular on Limerick
Regional Hospital. Furthermore, it will free up ambulances and
facilitate patients from North Tipperary to get back to Nenagh
Hospital for after care following acute procedures in Limerick".

Following on from the announcements in Shannon and Knock these new routes mean that approximately 1 million new passengers will go through Irish airports which has to be good news for tourism. It shows that the government's decision to lower the travel tax and keep the 9% vat rate has provided huge dividends and I expect other airlines to follow suit in the future. 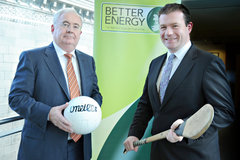 Pat Rabbitte TD, Minister for Communications, Energy and Natural Resources and I highlight the recent news that five Tipperary GAA Clubs are to receive energy upgrades as part of a major investment package announced by Minister Rabbitte. The Clubs include Ardfinnan, Upperchurch Drombane, Killenaule, Silvermines and Roscrea GAA Clubs. The upgrade will save each club approximately €2,000 a year each, which can be used for club development purposes.

Good News for Schools in Tipperary