I was delighted to unveil the new Leap Card, the long-promised integrated ticketing for Dublin. After 12 years of promises, it’s great to see this project final get off the ground, a positive move for integrated travel. I have worked extremely hard to get this project moving as I felt it was important to commuters. We have 500 customers testing the system for us at the moment and we’ll take their feedback so that the final launch is as smooth as possible.

I’m thrilled to note that since my time in office over €600,000 has been allocated to projects in South Tipperary as part of the Smarter Travel Initiative. This funding provides a small boost for the local economy and encourages cycling and walking and more sustainable transport. Tipperary is one of the counties that has benefited greatly from the jobs initiative.

The funding forms part of a €2 million national package for smarter travel measures. I was delighted to announce a series of public bike symposiums to be held in Cork, Galway, Limerick and Waterford in an effort to secure private sector support for bike schemes in these cities. Given the massive success of the Dublin bike scheme I believe having the scheme in other regional cities will be a great boost to the local economies. We have to look at alternative funding and to business, civic and community groups for their ideas to support this Government initiative but I believe these schemes offer business an innovative way to get involved in developing an iconic mode of transport in the cities. 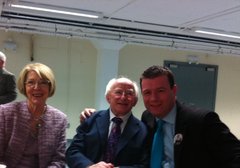 With the President Elect Michaal D. Higgins and his wife Sabina in Dublin Castle

I must congratulate Michael D. Higgins, our President Elect on his fantastic victory.

My colleague and friend Michael D. Higgins is a man of huge courage, conviction and vision. He has always been a hero of mine and an inpiration to me and that's why I am so proud of his victory in this Presidential election. Michael D helped and encouraged me to get into electoral politics with the Labour party when I first got elected to the Senate in 2007 and I will never forget him for that. Earlier this month the Irish Cancer Society received a cheque for €112,000 from the Relay for Life event that was held recently in Toomevara. This is a huge achievement and I'd like to congratulate everyone involved, particularly the organising committee who I truly know worked so so hard. Well done to all the teams and participants. It was a very moving experience. There isn't a family who has been affected in some way by cancer so this was a hugely worthy cause. I spent the weekend at the event myself and I'd like to especially thank my own team for all their efforts. Can't forget the 'Wacky Walkers' next door to us as well. We all helped one another along the way.

During the summer months you will often see the local kids diving off the bridge or the mooring piers in Killaloe/Ballina into the River Shannon. For those of us not quite brave enough for this, there is a public outdoor swimming facility at Riverside Park in Ballina during the summer months for children of all ages which is open from May to September. I am delighted to announce that this pool, among others, is to get much needed funding: over 55K,  to improve energy efficiency, to provide better accessibility for people with disabilities and other local improvements.

Delighted to announce that my Department has allocated €66,428 for an outdoor gym and MUGA (Multi Use Gaming Area) at the Lakeside Ballina and €23,369 to refurbish existing MUGA at Dundrum Road in Tipperary Town. Multi-use games areas – or MUGAs – are one of the most popular additions to municipal parks, playgrounds and open spaces due to their incredible versatility and they offer a very cost effective answer to a wide variety of sporting needs I'd like to say a big Thank You to all the local supporters and well-wishers who greeted Michael D Higgins during his recent visit to Nenagh. The presidential candidate met local supporters at the my office last Monday and proceeded to meet and greet locals in the town for a considerable time afterwards.The crowd stands as a testimony to the support that Michael has in this campaign. Needless to say I give my whole-hearted support to Michael and his campaign.  The group met with various members of the town, including Peter Ward, with whom the presidential candidate had a good chat about creativity in the food industry in rural Ireland.Mayor Virginia O’Dowd and Stephen Slattery: Chair of Nenagh Castle Development Association then showed Michael D around the Nenagh Castle site: a project that Michael had allocated funds to when he was Minister for the Arts. Michael was thrilled with the reception he received here and is looking forward to engaging in what will be one of the most exciting presidential campaigns ever.For me Michael is the standout candidate and the person the country needs right now. He has stood up for what he has believed in all his life without fear or favour and I think that is the kind of politician we need in the Aras.

Sitting at my Desk in Department

I got a phone call early on Thursday March 10th to ask if I would make my way to Government Buildings as the Tanaiste wished to speak to me. I had enjoyed a great day previous as it was my first day in the Dail as a sitting TD. I got in there as quickly as possible and met Sean Sherlock who had been asked to come in as well. 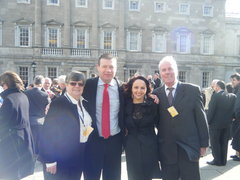 With Regina and My Parents on First Day in Dail

It was with great pride and emotion I entered the gates of Leinster House on my first day in Dail Eireann. I know the place well. I had been going in there during my days in Labour Youth, as someone who held various posts in the Labour party and as an ordinary member. I had also been in there as a Senator and MEP but there was definitely something differnt about being a TD.