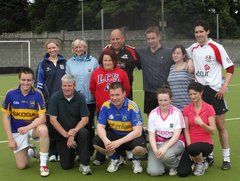 Alan Kelly's Warriors Team took part in the Caman Abu Tournament in the Ursuline Convent Last Saturday as part of the Thurles Sarsfield International Hurling Festival.  The team made it to the final but unfortunately lost out to the Dew Valley.  A great day was had by all despite the defeat in the final, our star player on the day was Ger Slattery, even the referees lost count of his goals at times!  The team members were Alan Kelly, Hazel Maher, Tracey McGee, Jim McGrath, Ger Slattery, Dylan and Marion Denyer, Darren Hogan, Laura Brennan and Siobhan Horrigan, so there were representatives from clubs throughout Tipperary.  Alan Kelly and Hazel Maher had double roles, with Alan taking on the important role of An Bainisteoir and Hazel assisting him as the Assistant Bainisteoir. I had a brilliant night at the inaugural Labour/Fine Gael Charity hurling challenge which took place in Dublin last week. The match was played under flood lights late on Tuesday night, March 13th and I was the only member of the Government to line out on the night. Labour comprehensively beat Fine Gael by 6-8 to 1-2. I did Portroe proud playing at full back where I was joined by joined on the Labour team by Cappawhite's Jim McGrath and Kiladangan's Ger Slattery. It was great fun and raised some funds for the Merrymount Hospice in Cork. I was delighted to attend the recent  Road Safety Authority’s Annual ‘Seatbelt Sheriff’ and ‘Hi Glo Silver’ Awards  in Dublin Castle. These awards recognise the outstanding contribution these children have made to keeping Ireland’s roads safe  231 schoolchildren from ten primary schools around the country were rewarded  for their efforts to improve road safety. This awards ceremony is one of the most important events in the road safety calendar as it recognises the commitment of young people to making our roads safer. Through their creativity and hard work, they have shown just what can be achieved when we all make road safety a vital part of our behaviour. For that, I thank the children and their teachers for their support and encourage them to keep up this life-saving behaviour.

Nenagh Castle to Open by June Delighted that Nenagh Castle is to be officially opened in early June this year. Visited the Castle yesterday, it looks absolutely fantastic. It will be a huge attraction for Nenagh and surrounds. Heritage sites attract millions of visitors to Ireland every year. I'd like to thank the OPW and Nenagh Town Council for the commitments they have given. I am hoping that President Michael D. Higgins will officially open the Castle. He was the Minister who initially gave the funding to restore the Castle in the 1990s so it would be great to have him back again. I have recently announced an overhaul of rail services on the Ballybrophy railway line, including additional early morning train services to Dublin under the new Iarnród Éireann Spring/Summer schedule. This is a fantastic development for those living and commuting in the areas of Nenagh and Roscrea. As the local Minister in the Department of Transport, providing this vital service has been a priority for me.

These new trains mean you'll be in Dublin in 2 hours 20 minutes from Nenagh and there will be no change at Ballybrophy on this service. What this effectively means is that for the first time people from Nenagh have the ability to get to Dublin, on one train, for work or college before 9am. This team are an inspiration. They came to me last November looking for my support and of course it was forthcoming. Nenagh has always had a strong interest in cycling and the lads have been participating in cycling competitions in some cases for over a decade. It is a fantastic achievement to have our own team in Nenagh that will promote the town and the area in general. Nenagh has a unique selling point now with the N7 cycleway to Limerick that will be able to attract in events and competitions in the future. Working with the team and their supporters I want to make Nenagh, a town placed in the centre of the country as the centre piece of Irish cycling'. I am delighted to announce that Limerick has officially become Ireland's Smarter Travel Demonstration City 2012- 2016 and will receive a €9 million investment initiative to develop different approaches to transport and spatial planning to encourage people out of their cars, I spent a very enjoyable time on the bikes at Bedford Row, Limerick with Limerick Mayor Jim Long. I visited the 2012 Young Scientist Exhibition last week and came across many interesting projects which demonstrate that there are Tipperary teenagers out there putting their brains to work in the food and science sectors. I met with schools from Borrisokane, Thurles and Roscrea during the day. It is only when you see that many enthusiastic kids under one roof you think, yes, there are brilliant students out there and they can ensure the future of innovative indigenous business. There was an incredibly high standard of local entries, which illustrates that North Tipperary students are among the best in the country.

Launch of DVD on Tipp War of Independence

On Friday the 6th of Jan 2012, in the Bru Ború Theatre in Cashel, I launched a Commemoration DVD for the Third Tipperary Old IRA. “Where Tipperary Leads Ireland Follows” relates the activities of the people who were in the frontline during the period of the War of Independence.  I was honoured to be asked to launch this DVD. This marks an important period in Irish history, one that still holds a fascination for many people. This DVD deals specifically with the Tipperary personalities that were involved in the conflict. It is widely recognised that the events in Tipperary such as the Soloheadbeg raid, effectively started the War of Independence. As such Tipperary played a pivotal role in the forming of our not just our nation’s history but our county’s history.  This DVD is a fascinating glimpse into the action in the County, the hardships endured by the local people and the patriotism of the people involved in such a conflict. I am pleased to announce that work has been completed on the Ballina Multi-Use Gaming Area at the Riverside Park. I worked hard to secure the funding for this project for a long time as I believe it is something that will enhance the local area and benefit the local community. This area is popular, very central and provides great opportunities for both young and old to keep themselves fit, healthy and active. I'd like to praise the efforts of all involved in this project and am sure it will make a fantastic addition to the town.