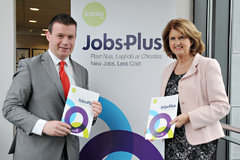 I am pictured here with Minister for Social Protection, Joan Burton, TD at the announcement of JobsPlus.

JobsPlus is a new employer incentive, from the Department of Social Protection, which encourages and rewards employers who offer employment
opportunities to the long term unemployed.

This is a simple scheme for employers to access up to €10,000 for a qualifying recruit, payable on a monthly basis over a two year period. JobsPlus is a new employer Incentive which will encourage and rewards small and medium employers in Tipperary who offer full time employment opportunities to the long term unemployed on the Live Register.

The Scheme offers regular cash payments to employers to offset wage costs where they engage jobseekers from the live register. 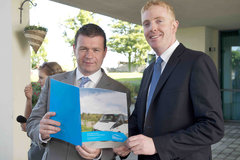 Tipperary is set to benefit from major changes to the rural transport programme with the creation of a new Transport Co-Ordination Unit (TCU) for the county.

The new unit will oversee the co-ordination of rural transport services across Tipperary. The TCU will be an independent company but likely to be based from a local authority office. They will be the ‘go to’ point for local communities and passengers to develop transport services right across the county.

I am overseeing the changes to the rural transport programme and I believe the changes will be a major boost to transport services in Tipperary. 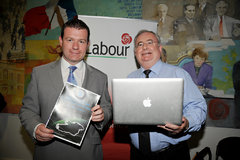 I am pictured here with Pat Rabbitte TD, Minister for Communications at the launch of the National Digital Strategy.

I find it hard to believe that I have known, respected and admired Frank Lewis for 39 years and harder still to believe that he is gone.  Frank Lewis was a gentleman, a natural leader, an accomplished organiser, a labour stalwart and a rock of common-sense.  He was a loyal colleague never reticent about bluntly asserting his own views.  He commanded authority and respect in the often fraught and contentious world of trade unionism.

He thought about politics and issues rather than following whatever was the fashion of the time.  He cared about his own community and how it could be enhanced.  He enjoyed sport and before Tipperary, in more recent years, produced some national household names in rugby, Frank was a member of the team that won the Munster Junior Cup in 1948.  He served two terms as Chairman of Tipperary (NorthRiding) County Council and a term as Chairman of Shannonside when it had responsibility for the promotion of tourism in the region.  He was interested in Education and Health Policy and again worked creatively within the structures to improve outcomes in both areas.  Along with his comrade and friend John Ryan he ploughed a long furrow for the Labour party in Tipperary North sometimes in good times and sometimes in difficult weather.  Frank Lewis was a big man with a broad vision, confident in what he believed and, consistent with his values, independent minded and determined.

Frank Lewis, as was the pattern at the time, started work in the aluminium factory at the tender age of 14.  The struggle at that time was to avert closure of the factory because raw material was hard to source during the war.  Most of the workforce were taken to England to help the war effort.  The remaining workforce were obliged to cut turf to drive the furnace because it was the only fuel they could get.

When their comrades returned after the war a clandestine campaign started to organise a union and tackle the poor wages and conditions.  It was a bitter campaign for union recognition culminating in a 3 week strike.  Eventually the company settled with the union and pay and conditions were improved. After that the young Frank Lewis was nominated to represent his fellow workers becoming part-time Secretary of the Nenagh branch of the ITGWU in 1952.

As he climbed up the trade union hierarchy, Frank never forgot Castle Brand or the early lessons forged in war-time conditions in the struggle for union recognition.

When I met Frank in 1974 he was District Secretary of the union responsible for the county and for some of the most difficult industries like mining, food and drink and, by then, an elder statesman of the trade union movement.  When I joined the union as an official I served some of my apprenticeship under Frank's tutelage.  He taught me more than, at the time, I had the wisdom to know.

Frank, of course, was almost alone with the late Dan Shaw in union officials who knew the difficult mining industry well.  His experience was learned the hard way in Slivermines and, at that time, Tynagh and Tara were opening up.  Frank and I made common cause in an organisation called the Resources protection Campaign because of a shared view in the 70s that the country had serious prospects offshore as well as onshore.  Unfortunately it hasn't quite worked out that way but the very last time we met he asked me in my present job what did I think were the prospects.

As a trade union leader he was tough but fair; he was a man of shrewd judgement unlikely to take on a battle he couldn't win but strategic enough to make gains for his members in other ways.  He was the dominant figure in these key sectors for many years, prepared to confront unpopular challenges but never losing the support of the majority of his members.

During those years the pay and conditions set for key sectors under Frank's leadership were the terms applied nationally.  The national leadership of the ITGWU was his for the asking but he was never going to leave Nenagh or Tipperary or the lifestyle about which, when you met him in later years, he was always philosophical.

My last meeting with him a few months ago was in the Thatch Cottage in Ballycommon.  I always enjoyed meeting him and Ballycommon was no exception although in the preceding public meeting he didn't hesitate to get to his feet to tell me in trenchant terms where I was going wrong in Government.

I mentioned the campaigns he fought with John Ryan,  He also soldiered with the late Martin Kennedy, and, right up to the most recent contests with Virginia O'Dowd and of course with minister of State, Alan Kelly for whom he was a source of inspiration.  Labour in Tipperary will miss his common-sense advice.

Frank Lewis, Shop Steward, Branch Secretary, District Secretary of the country's largest union.  Local political activist, Labour Party member and officer, Councillor and Chairman.  Captain and President of Nenagh Ormond Rugby Club.  Founding member of Save Our Lough Derg Campaign.  Member of the Save Nenagh Hospital Campaign.  Family man proud of his extended flock and especially, he told me, of his grandchildren.  Frank lived life to the full.  His was no narrow vision of what it meant to be a citizen of this Republic.

The enormous contribution made by Frank Lewis meant that Irish trade unionism, his local community and his country are the better for having known him. 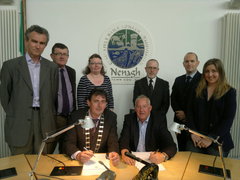 Thursday June 20 was a historic day when Mayor Lalor McGee signed the contract for the town park in Nenagh and the refurbishment .  The contract is valued at €2.149m and was awarded to PJ McLoughlin & Son.   In December last year I announced that my department had awarded  €400,000 to the park.  This was the largest amount given to any sporting application in the country under this Government's Sports Capital Grants.  This was on top of €144,000 that I previously announced for the Leisure Centre.  Mayor Lalor has championed this project since his election campaign in 2009, he collected 2,500 signature on a petition for the park,  he promised if elected his main aim would be to get a Town Park for the town.  I would like to congratulate the town council and officials particularly Town Manager Marcus O'Connor for their commitment to the project and previous councils who allocated funding to the project.

An Evening with The Stars 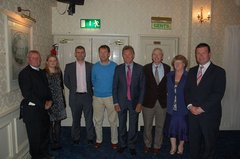 I was delighted to be in a position to organise with the Dorney Family, An Evening with the Stars, a fundraiser for Thurles Crokes Athletic Club recently.  The Dorney Family are associated with the club for  a long number of years.   The event was attended by All Ireland winning GAA Managers Liam Sheedy and Jack O'Connor and former Irish athletes Eamon Coughlan and John Treacy.   The event was chaired by Irish Independent Journalist Damien Lawlor and a great night was had by all.   There was a question and answers session where a lot of issues were covered. 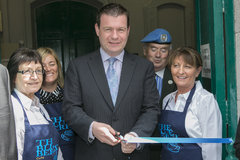 On Friday June 14 I joined the Chairman of the Post 24 Irish UN Veterans Association, Michael Haslam at Clonmel Station to officially open the Blue Beret café at the station. The café will be run by volunteers from the Post 24 Irish UN Veterans Association, South Tipperary (IUNVA). The café will be open from 07:30hrs to 17:30hrs Monday to Saturday and will provide refreshments not just for the people of Clonmel, but also bus and train passengers at the station. The café will also have toilet facilities that can be used by members of the travelling public.

Alan_Kelly_Our Ladys Secondary school Templemore
On behalf of this Government I was delighted last week (June 5th) to announce that Our Lady's Secondary School in Templemore is to be completely refurbished and extended. It is to receive a very large multi million euro allocation.

This follows several meetings between myself and representatives of the school that begun in detail on September 21st, 2012. Indeed only on Thursday May 30th I brought the Principal of the school Patricia Higgins, school teacher Seamus Burke and the Chairman of the Board of Management John Lynagh to meet Minister for
Education Ruairi Quinn TD. This was a very successful meeting. Minister Quinn followed up with me that he was very impressed by the representation made by the school and the fact that I had made them a priority. He assured me that their new school would be funded once money became available and he honoured his word 6 days later.

I am delighted to have delivered this massive project for the town of Templemore and surrounds. Our Lady's Templemore is a fantastic school with brilliant staff.

Of course this project will also bring with it local employment and revenue to the town so this is a fantastic announcement.

This school redevelopment is ready to go, so I look forward to the competition of this excellent project.  I expect the tendering process to be completed before the end of the year' 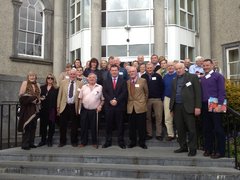 I recently attended the Kelly Clan Gathering in Dundrm House Hotel, I am pictured outside the event with some of the group that attended the event. 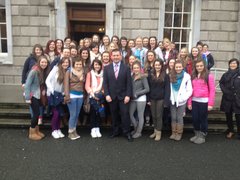 I am pictured here with a group of Transition Year Students from the Sacred Heart Presentation Convent, Thurles and Lorraine O'Keefe Teacher outside the Dail at end of the students' tour of the Dail.