People in Tipperary have just a few days left to make their views
known to the Government on cyberbullying. A public consultation
process on cyberbullying is currently underway and the deadline is
next Tuesday, March 18th.

Views gathered from members of the public will feed into the work of
an expert panel set up by Minister Pat Rabbitte to advise him on the
issue. The process is a valuable opportunity for those who are
concerned about the issue to contribute to the debate about
cyberbullying.   People can submit their views by logging onto
www.dcenr.gov.ie and checking out the section on the Internet Content
Advisory Group. Views can be easily submitted online. 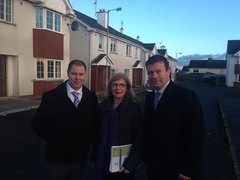 My colleague Jan O’Sullivan TD, Minister for Housing & Planning has announced that €1.1 million is to be invested in the 12 houses at Ros Na Cronan, Ashbury Roscrea. This is great news for Roscrea, with this investment; the town will see 12 extra local authority houses in the town.

I recently organised Minister Jan O’Sullivan to visit the estate with myself and local election candidate Shane Lee. This gave the Minister the opportunity to see first-hand the need for investment in the estate. Following on from her visit, I was in constant contact with Minister O’Sullivan to ensure that this funding would be delivered. I am delighted that my hard work has paid off and that the funding has been delivered.

That's why I brought senior North Tipperary Council officials to Newport on February 7th last to discuss this and other matters. I was assured then      by them and as recently as this Monday in a meeting with the Council County Manager Joe MacGrath that funding will be provided by the Council from their own resources to deliver this playground. This is fantastic news and I'm delighted we have taken this huge step. 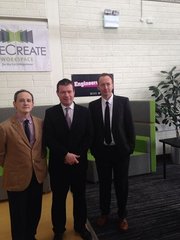 1620847_10201318770040527_314711574_n
Friday morning last, I was pleased to open Ireland's first 'Fab Lab' in Cloughjordan. It's called 'We Create' and is basically an enterprise centre for SMEs and entrepreneurs. Key difference is that it offers its clients access to state of the art dig...ital fabrication equipment such as 3D scanners etc. Such equipment is quite expensive and not available to everyone so it's provision here gives capacity for SMEs and entrepreneurs to deliver products and technologies that they otherwise may never get a chance to. Its a co-operative in nature in much of its work but has the capacity to deliver hugely for all those who use it. Well done to Anthony Kelly and Ben Whelan who created the 'Fab Lab' and also to Leader, North Tipp Enterprise Board and the county council for their support.See More

Labour Convention
I am delighted to introduce the ten Tipperary Labour Party candidates selected on Friday night last in the Anner Hotel Thurles to run in the Local Elections in May. For the Nenagh electoral area, Labour selected four candidates, Fiona Bon...field from Newport, Nenagh-based councillors, Cllr Virginia O’Dowd and Cllr Lalor McGee while operation transformation’s Greg Starr completes the billing. All candidates spoke passionately about trying to improve the quality of life in their communities and to give the people of their area a voice to advance local issues. Fiona Bonfield, said that despite being new to politics, she was confident could represent her area on a new Tipperary local authority. For Fiona it is all about improving community life and building on much of the great work that is already being done locally. Cllrs Virgina O’Dowd and Cllrs Lalor McGee paid tribute to outgoing councillor Jonathan Meaney and both promised to build on their previous work on Nenagh Town council and North Tipperary County council with Virgina O’Dowd promising to pioneer local tourism projects if re-elected. Greg Starr thanked that people of Tipperary for supporting him through Operation Transformation and said he hoped to ‘return some of that support by way of actions that support communities’ For the Thurles/Templemore electoral area, Cllr John Kennedy and Roscrea-based Shane Lee will be flying the Labour banner. Cllr Kennedy paid tribute to outgoing Thurles town councillor, John Kenehen while the very popular Shane Lee told the crowd that he believed Roscrea had suffered from the lack of a local labour councillor. For the Tipperary/Cashel electoral area, retired council worker, Mick Byrnes was selected. Mick, who narrowly missed out on a seat at the last local election, said he was confident he could go one better this time. For the Clonmel area, Labour selected previous poll-topper and sitting councillor, Seanie Lonergan. Seanie said it will be tough but it is very enjoyable when you know you have helped someone or brought about a change to improve your community. For the Fethard/Carrick-on-Suir area, Cllr Michael Cleere, co-opted to the council last year will be seeking to retain the seat while running alongside him will be local Labour activist Liam Hayes.

I am encouraging all sports clubs across Tipperary to register for €40
million sports capital fund before 7th February.

The  2014 Sports Capital Programme is open for
applications since Friday 17 January, I urge all sports clubs across
the county to register as soon as possible to be in with a chance of
accessing funds. More than 1,000 clubs have already registered their
interested, and the closing date for registration is 5pm on Friday 7th
February.

The application process for grants has changed, and is now carried
out through a new online registration system. It means it is now
quicker and easier than ever before for sports clubs to apply for
grants, and will ensure a more streamlined and user-friendly service.
Any club interested in applying for the funding should go to
www.sportscapitalprogamme.ie to register and make an application.

Grants under this programme are available to sports clubs, voluntary
and community groups, national governing bodies of sports and local
authorities. I would be delighted to help any club with their
application.

“The two key dates that clubs should remember are 7th February when
all clubs must have registered their interest and 28th February, the
closing date for applications”. 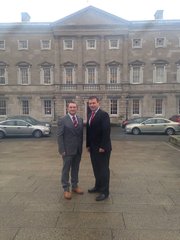 Delighted to announce that Greg Starr is putting his name forward as a Labour candidate in the forthcoming Local Elections. Greg is a fantastic guy who became a household name during last year's Operation Transformation. He's married to Clare and has an 8 year old son Eoghan. He comes from a fantastic family and I know he will be a great advocate for the Greater Nenagh/Borrisokane Area.

Today I opened Shane Lee's new office in Roscrea. He had a fantastic turnout and the opening of his office shows he is determined to win a seat for us in the Roscrea/Templemore/Thurles area. Well done to all involved and thanks to everyone for putting in such a huge effort to get the office opened so quickly. Please support Shane. He's a great young man and a credit to his family & friends.

I welcome the announcement this morning by Aer Lingus Regional of 100,000 additional seats across three UK routes for next year from Shannon Airport.
The announcement includes a new daily Bristol service, Manchester frequencies to increase from two to three times daily and Birmingham service to double its existing daily flights.

This is great news for Shannon Airport, this announcement will lea...d to the creation of 20 new jobs at the airport. It follows on from Ryanair’s announcement of eight new routes from the airport. This is further evidence that the government's decision to lower the travel tax and keep the 9% vat rate has provided huge  dividends. These new services are a major boost for tourism and business in the Shannon region.