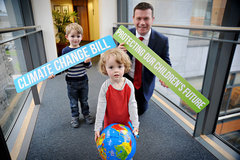 I am urging people to play their part in a national drive to tackle climate change, as new laws aimed at protecting the environment are set to come into force soon.

Tackling climate change so that future generations of people in Tipperary can live in a safer, cleaner environment is a critical issue.

It is vital that local people now work together to protect the environment in areas given that Ireland is bound by new low carbon rules for the very first time.

The Climate Change Bill - the first piece of legislation of its kind - continued to progress through the Dail this week.

Labour is acting now to protect the environment so that our children and future generations have a safe and sustainable future.

Successive Governments down through the years merely toyed with the notion of tackling climate change, but we are the first to actually introduce legislation on it. This is something the Labour Party promised we would do if we got into Government and we are doing it. Not even the Green Party were able to achieve this when in power.

The bill aims to assert environmental change right down to local level. As Ireland’s greenhouse gas emissions profile is predominantly made up of emissions from agriculture, transport, energy and the built environment, it is in these sectors that most mitigation effort will be required.

The challenge we face now is to bring local communities with us as the Government leads the charge to tackle climate change. For that we need the support of people in Tipperary so we can reduce carbon emissions in so far as is possible, and make a collective effort to meet our new low carbon targets.

Tackling climate change also creates job opportunities as it assists in selling the message that ‘Brand Ireland’ is a safe, clean place to do business.